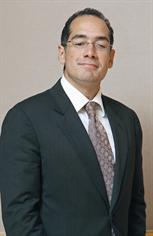 Mr. Hisham El-Khazindar is Managing Director and Co-Founder of Citadel Capital, the leading private equity firm in the Middle East and Africa. Established in 2004, Citadel Capital controls investments in excess of US$ 8 billion in industries including mining, oil and gas, cement, transportation and food.
Prior to co-founding Citadel Capital in 2004, Mr. El-Khazindar was Executive Director of Investment Banking at EFG-Hermes, a leading regional investment bank, where he advised on key transactions in the Middle East and Africa including the IPOs of Orascom Construction Industries and Orascom Telecom, and where he started his career in 1996. In 1999-2000, he was on secondment to Goldman Sachs in London, where he advised European firms on strategic options and M&A transactions.
Mr. El-Khazindar sits on the boards of a number of leading Egyptian and regional companies including ASEC Holding and El Sewedy Cables.
Mr. El-Khazindar was the Chairman of the Capital Markets and Investment Committee at the American Chamber of Commerce in Egypt in 2008-2009, was nominated as a member of US-Egyptian Business Council starting 2009, and also serves as a member of the Advisory Committee of the Emerging Markets Private Equity Association, a founding board member of the Egyptian Private Equity Association, a board member of the Egyptian Capital Markets Association, and a member of the board of advisors of the American University in Cairo’s School of Business.
He holds a BA in Economics from the American University in Cairo (1996) and an MBA from Harvard Business School (2003).

Email Us | Get Directions